Into the future: Dries Buytaert’s vision of Drupal 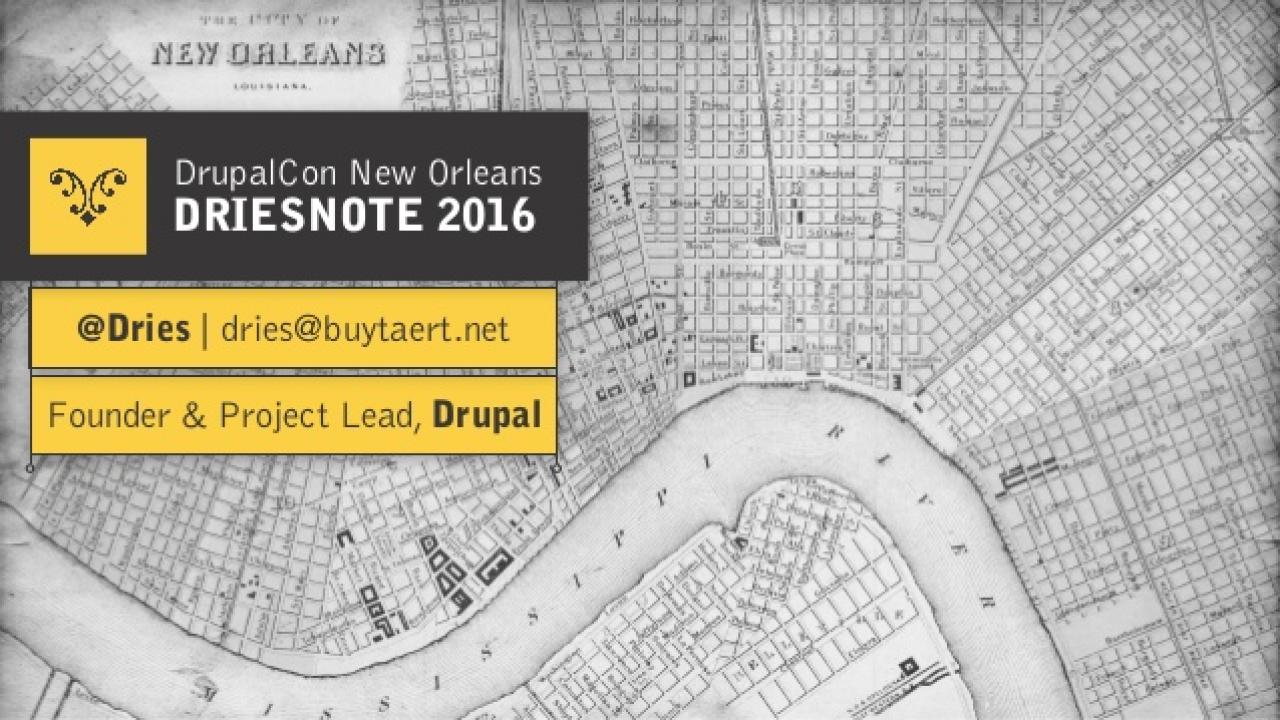 This year’s North American Drupal convention was hosted in New Orleans this past May and, from all accounts, it was a tremendous success. Drupal’s creator, Dries Buytaert, gave the keynote address, discussing his proposed vision for the future of the Drupal Project. For those users who are new to Drupal, Buytaert himself subscribes to the ideal that development is community-led; he doesn’t set the agenda—users decide what to accomplish. That said, given his role in creating and developing the software, Buytaert stands as a leader in the Drupal world and his contributions are given due weight.

All the data collected so far indicates that Drupal 8 is a great success. Over 3300 people contributed to the core components of Drupal 8, a 300% increase over the 934 who worked on Drupal 7’s core. The improvements made in this latest version have resulted in a much faster adoption rate and it’s expected to continue to increase through 2018.

Buytaert seeks to capitalize on the momentum gained through the release of Drupal 8 by releasing updates every 6 months. Drupal 8 and its first update, 8.1., were released on schedule, with 8.2 scheduled to drop on October 5, 2016. With work being constantly contributed, reviewed, and released, he’s hoping the increased activity and visible, usable output will inspire more users to get involved and contribute to Drupal’s success.

The key to improving adoption, in his opinion, will be the work done to update modules that currently work in Drupal 7 to also work in Drupal 8, a conversion process called ‘porting’, so that users will be able to migrate their sites from 7 to 8 while preserving their desired functionality and presentation.

The Drupal community was surveyed to garner input on what should be focused on next and what specific areas need improving. Overwhelmingly, the community said 75% of the focus should be on areas affecting content authors and site builders, with the remaining 25% on the front- and back-end developers.

Buytaert used the data collected from the survey to create the following initiatives, but adding a caveat that it will be up to the Drupal community to discuss and decide on which projects to adopt and collaborate on for completion.

Unlike a number of other software and platforms currently available, Drupal is uniquely situated to not only stay relevant to the future of technology, but to help shape it and the user experience it creates. An increasing awareness of the importance of ease of use—a design that allows users to intuitively figure things out—with a huge suite of simple-to-use but robustly built tools will make Drupal the go-to software of choice.

Buytaert envisions a superior digital experience for users when the user’s context is taken into consideration. As an example, it would be the difference between Starbuck’s website providing static information versus ‘place my favorite coffee order in the closest Starbucks so it’s ready for me at the drive-thru where I can then pay with my phone.’ He imagines a future where Drupal can help create and define that experience.

Add a Coronavirus Information notification block to your site

10 Things to make your BADCamp rock!